And as someone who has read more than her fair share of SciFi and Fantasy involving time travel, I’ve always entertained thoughts like: “Wouldn’t it be awesome if I could go back in time and {fill in the blank}?” This blank I have often filled with things like:

Without the Heart of Gold on hand, I didn’t think any of these would be possible (or probable), however, on Friday night I did experience the Beatles.

When the Rain Comes (to Seattle)

CJ and I went to go see Rain, a Beatles tribute band that does more than perform their songs: they imitate the Beatles with astounding accuracy. It was one of the most surreal, trippy, mind-bending experiences I’ve ever had.

The show was broken into several sections, each section representing a definitive portion of Beatles discography, beginning with Hamburg-style covers of things like “Oh Boy” and “Ain’t She Sweet” all the way to Abbey Road. Each section was denoted by very dramatic set and costume changes, with meticulousness that included the band members donning and doffing wigs, glasses, and mustaches as appropriate. (The below photos hardly do it justice, the phone camera didn’t want to focus from that distance.) 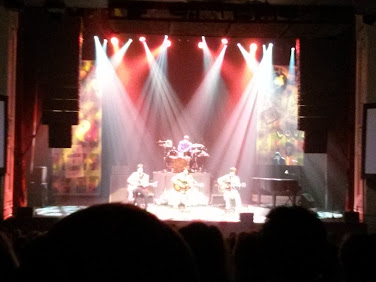 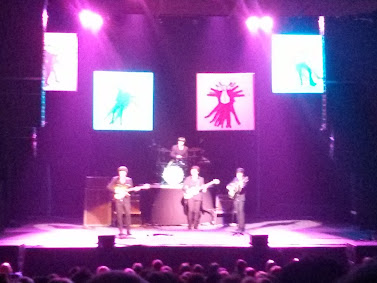 Rain wasn’t merely spectacle – they sounded like the Beatles. Some songs were so similar to Beatles recordings that if I closed my eyes and listened closely, I couldn’t be sure it wasn’t the Beatles. “Paul” was almost a duplicate of the real McCartney in voice, mannerisms, and looks. He even nailed the signature straight-legged rhythmic head tilt. “John” sounded so similar to Lennon, and “Ringo” even nailed it. “George” was the only one who didn’t have me mostly convinced throughout the show.

The set up on the big screens around the stage was amazing, mixing actual Beatles footage with clips of Rain, and even incorporating live shots of the audience. This was an incredibly effective touch. The look and sound of the band was so close to the real thing that when the screens cut to clips of frantic women screaming in ecstasy and fainting over the Beatles, though I knew the events I was “witnessing” were at least 40 years past, I couldn’t help but feel this very strange sense of communitas tugging at my mind and nerves. I wanted to feel that excitement. I desperately wanted to believe Rain was the Beatles and ride the energy – energy that can only be found room full of people experiencing joy and delirium inspired by irrational fanaticism.

In the end, I didn’t allow myself to get completely carried away – partially because of the crowd. It was far too subdued for me to believe we all enjoyed a shared experience. Everyone mostly remained sedately seated except for the few songs the band was able to get the crowd standing and dancing.

Moreover, there were just enough differences between Rain and the real Beatles that I left feeling somewhat…unfulfilled? Here are my bad analogies that barely explain it:

This was the closest I’ll ever get to experiencing one of my favorite bands, and while I poke fun at how it “wasn’t quite right”, it served as a pleasant reminder exactly how embedded the Beatles are in my life. When I was small, “Yesterday” is what my mother would sing to me when I asked for a lullaby. And from that song on, I loved them all, assigning each one special meaning.

Clearly, I am not unique – the Beatles are universal and have similar significance to so many. Rain does an amazing job of almost being the Beatles and providing a taste of something long gone. I’m so glad we went. I would recommend this to anyone who loves, or vaguely likes, the Beatles.